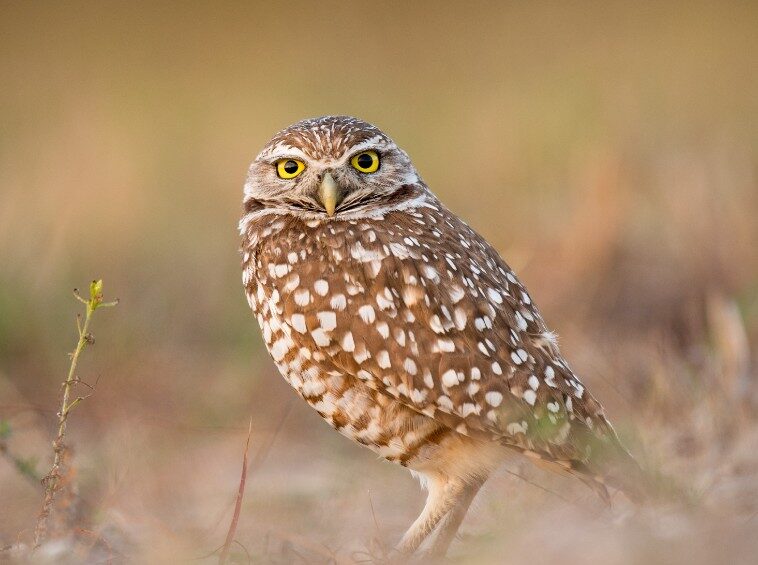 The burrowing owl (Athene cunicularia) is a unique, charismatic, little ground owl that lives in the Canadian prairies.  The species is the only North American owl that nests in the ground. You might think that with a name like “burrowing owl” that the owl would be able to burrow but they cannot.

Burrowing owls rely on foxes, badgers, coyotes and ground squirrels to excavate burrows. Once burrows are vacant, the burrowing owl will take over the spot.

Burrowing owls are listed as Endangered across their Canadian range. Their population has declined by 96% over the last 50 years, especially in the most northeastern and northwestern extent of their breeding range (Manitoba and British Columbia). There has been no single factor pinpointed to have caused their decline however several factors working simultaneously appear to be negatively impacting the species survival.

The Manitoba Burrowing Owl Recovery Program (MBORP) is working with cattle farmers in southwestern Manitoba to increase the species population through reintroductions and creating protected burrows for returning burrowing owls to nest. MBORP selects best sites to release owls and install artificial nest burrows based habitat suitability for burrowing owls which is collected from roadside surveys. Lands are selected based on several criteria but most importantly pastureland that is grazed.

Grazing cattle keep the grass short which allows for the owls to find food easily (they eat a lot of insects –a favourite is grasshoppers!) and have a clear view of their burrow and the landscape should a predator be nearby.  MBORP has worked with many cattle farmers over the years and has installed over 200 artificial nest burrows with their help.

In 2020, a pair of wild burrowing owls nested in an artificial nest burrow installed on private land in 2017 and this pair raised 6 young! This was the first wild breeding record in the province since 2011. Burrowing owls, as well as, several other grassland species at risk in Manitoba require open, grazed pastureland to thrive.

Cattle farmers play a huge role in maintaining grasslands for species at risk and their continued support is needed to ensure that conservation-dependant species like the burrowing owl do not disappear from Manitoba and Canada.

Manitoba Beef Producers is proud to be a sponsor of the Manitoba Burrowing Owl Recovery Program.